Don’t you worry about The Midlife Gals.  We always have BIG plans for Valentine’s Day.  So, go to your parties, have your romantic dates...even have SEX if you want to, really, we’re so alright.  We have um...each other.


Just get a load of our um homage to Valentine's Day in the video to your right on this page.  Join us for the day's hi-jinx!

XOXOXOXOX
KK and Sal
Posted by The Midlife Gals at 6:00 PM No comments:

Get a Glass of Chianti and Poke Around

Just so you all know...The Midlife Gals aren't just Fly-By-Nighters, here.  We have chops and a small but rabid following!  Cases in point:

July, 2007 - We didn’t know what a blog was.
August, 2007 - Posted our first essay on The Midlife Gals ® blog
( http://www.themidlifegals.com ).
October, 2007 - Approached by MORE Magazine about featuring us in an article.
January, 2008 - MORE Magazine article on the stands with our feature as one of four blogs mentioned / Women of the Blogosphere, page 30  / Jan/Feb issue.
March, 2008 - Entered video contest for The Greenlight Awards through an online video company, On Networks which was represented at the South by Southwest Film Festival.
March, 2008 - Selected as one of four finalists for The Greenlight Award in the category of best original digital series concept for the videos we produce of ourselves on The Midlife Gals ® blog.
April, 2008 - Approached by a very large online health network, The Health Central Network, to produce humorous videos and blogs for their website.   http://www.healthcentral.com/stop-smoking/c/55817/profile
April 2008 - Our video, ‘The Jazzy Scooter Barrel Race’ won runner-up award and was featured on the Emmy award-winning program, Docubloggers.
April, 2008 - Wrote, produced and acted in a fifteen-minute situation comedy pilot, The Cowpoke’s Ball, based on The Midlife Gals ® for network and/or cable distribution.
May, 2008 - Interviewed for large article in local newspaper, Masters of Their Domain / June, 08 issue / The Austin American Statesman.
August, 2008 – Asked by the Director of Programming to host a weekly, one- hour radio show, ‘The Midlife Gals; Necessary Insanity,’ on BlogTalkRadio  http://www.blogtalkradio.com/TheMidlifeGals
September, 2008 – Signed with literary agent, Frank Breeden of Premiere Authors for our book, The Midlife Gals; Necessary Insanity.
November, 2008 – Article in Austin American Statesman / social column, “Out and About” about The Midlife Gals’ fame.
December, 2008 – The Midlife Gals’ website featured as one of Austin’s best websites / Austin Monthly magazine / Keep Austin Wired / page 134 / Dec. issue.
December, 2008 – Launch of new YouTube video show , The Midlife Gals; Necessary Insanity.  Think Carol Burnet on meth.
http://www.youtube.com/user/TheMidlifeGals
December, 2008 – KK and Sal acted in an independent film, “Ultimate’s Guide to Flight,” directed by Scott Meyers of Entertainment Think Tank.
March, 2009 – The Midlife Gals video picked as part of Reel Women’s film showcase at South by Southwest Film Festival, Austin, TX.
April, 2009 – Asked to be regular writers for More Magazine online.
May, 2009. Also producing and starring in a weekly twisted video column for More.
September, 2009 – Featured as two of Austin American Statesman’s “Fortunate 500” (media category).
February, 2010 – Featured in two national commerciasl for Charter Communications
March, 2010 – Two videos in SouthSlam Festival during SXSW, Austin, TX.
Awards - ”Best Slapstick Comedy”  -
Side Effects - http://www.youtube.com/watch?v=TmROZYrdJHg
and “Best Situational Comedy” – Dating in the Eighties Dot Com - http://www.youtube.com/watch?v=yCfrnSiz57E
March, 2010 – Featured in an article in the Wall Street Journal/March 27th/”When Siblings Step Up” http://tinyurl.com/yjesd6a
April, 2010 – Featured in Austin Monthly magazine/page 96/”How to Be Happy in Midlife”
July, 2010 – In an Internet commercial for AOL Travel.com
September, 2010 – Part of ensemble cast In an indie film, The Man From Orlando
October, 2010 – Part of ensemble cast in movie, Ultimate Guide to Flight, premiering at Austin Film Festival / director-Scott Meyers
November, 2010 – On Good Morning America in the video series: Your Three Words (disguised as sisters!)
November, 2010 – Featured in Boston Globe about caregiving, with our video Caregiving The Ancient One:
http://www.boston.com/community/blogs/fiftyshift/2010/11/its_national_family_caregivers.html
March, 2011 – Part of an ensemble cast in movie, Day of Delusions / director-Scott Meyers
October, 2011  - AUSTIN AMERICAN STATESMAN / Nominated again for Michael Barnes’ “Out & About 500” most influential Austinites - Media category
December, 2011 -  AUSTIN AMERICAN STATESMAN / Tales of The City feature: Essays by the Midlife Gals on our impending move to Hawaii
February, 2012 – Featured in a Purina Cat Chow national Internet commercial
April, 2012 – Interview and article with The Midlife Gals on large site, SecondActs.com…’The Midlife Gals Take Hawaii’ http://www.secondact.com/2012/04/the-midlife-gals-take-hawaii/
November, 2012 - The Midlife Gals partner with national grass roots group, NoLabels.org to make funny videos about politics and all the things that don’t work...should be a piece of cake.
December, 2012 – Featured on PBS from Growing Bolder website TV show about boomers.  We’re 10 mins 13 secs into the show. http://tv.growingbolder.com/episodes/on-a-mission/
April, 2013 – Asked to become core video contributors for new baby boomer women’s video website, WHOA! Network, launched by Lynn Forbes of BlogHer and Darryl Pollack.
July, 2013 – Interviewed by Feisty Side of Fifty on BLogTalkRadio. http://feistysideoffifty.com/2013/07/12/the-midlife-gals/ 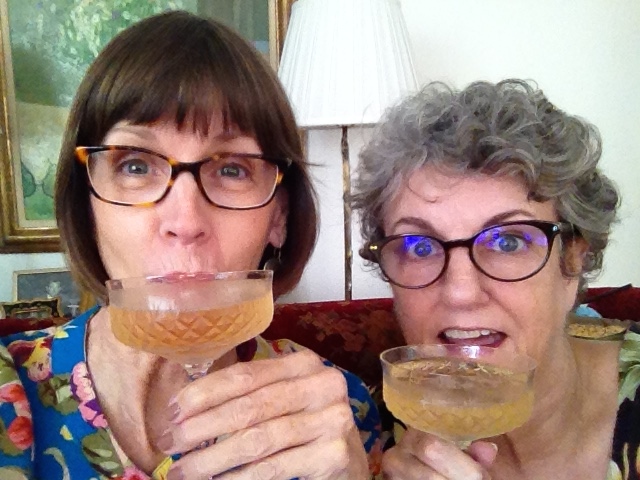 Posted by The Midlife Gals at 3:25 PM No comments: