Here's a post that is bothly timely and universal (November 2010) 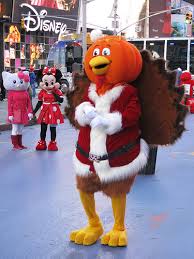 You’ve probably bought your turkey for Thanksgiving by now, yes?  Good, because these holidays happen FAST!  Before you’ve even dismantled the blow-up pumpkin with Casper inside, it’s time to buy the rust-colored fake dry leaves to adorn the Thanksgiving table where the turkey will make its appearance...for about 3.5 minutes before it too will be ‘dismantled’ into our stomachs until there are only bones left.  I realize that was kind of a long sentence, but it’s like these holidays...they just go on and on, bleeding into each other until Jan 1...after the black-eyed peas have been presented and devoured for good luck.  Then, and only then can we really relax.

I advise everyone to just wear black during these holidays.  That way, you can adorn yourself with accessorized color depending on which holiday.  Black and orange for Halloween...given.  Save the orange and mix it with rust, dull green and chocolate brown and you’re good to go with your black outfit for T’Day.  And, the black will be the perfect backdrop for the ridiculous Christmas tree brooches, tree light necklaces and candy cane leggings.  We’ve all just gone too far, wouldn’t you agree???

It’s really difficult to explain holidays to cats.  They are stupefied by a pumpkin and insulted by the requisite scary black cat with its back arched around All Hallow’s Eve.  They wind up on the kitchen counter eating every scrap available as we’re at the Thanksgiving table doing the same thing, but with forks.  And, the only thing they like about Christmas are the empty gift boxes and the tissue strewn all over the room.  They just don’t understand why we don’t leave all that stuff out every day.  You can’t explain interior decoration to them either...goes right over their tiny heads.

So, if you haven’t started feeling overwhelmed by the dizzying holiday seasons, you’re behind!  Get stressed, pissed off, bah-humbugged before it’s too late!

I put a scary witch and some spiders on the screen door for Halloween.  KK told me I was really lame, but she doesn’t’ understand how much fun it is to scare little kids.  I wish we could scare little kids at Thanksgiving too, but I’ll just have to settle for a pumpkin by the front door and a six-foot-tall-blow-up turkey in the front yard.  Decorations are a must for all holidays, as Austin needs to uphold its reputation for weirdness, and all of its denizens must contribute to this tradition.  Any kind of yard-art or door-wreath plasticity is highly encouraged by the population of this city.  Televisions perched in trees are a mainstay for Christmas decorations and if yours actually turns on, you are considered a genius.

I look forward to Christmas and all of its good cheer and fake snow in the windows downtown.  Of course, people in Austin go all out to celebrate the birth of Jesus, and Santa Claus seems to embody this festivity more than nativity scenes on the lawns or even lit-up ‘Our Lady of Guadalupes’ in the windows.  I hate Santa Claus…mainly because I sat in the lap of one when I was about three years old and his stale, smokey, bourbon breath almost knocked me into the fake bag of presents by the elf.  Even worse than that though was the fact that he had black stubble under his white beard, and then he handed me a scary doll that made me think of my best friend’s mother.  That was not good.  My best friend’s mother looked like Ed Sullivan.

But I digress.  I need to go into the decoration box in the garage and pull out the three-foot-tall papier mache monk holding the cornucopia overflowing with gourds and berries, and put the Christmas lights around him and put him in the window so people can see how involved we are in the holiday spirit.  Then I ‘m going to go hide in a box and lick my cat’s head.

SalGal
Posted by The Midlife Gals at 2:45 PM 1 comment: 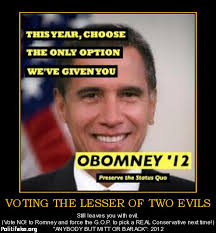 Our polling place on election day was at Thomas Jefferson Elementary School in the cafeteria.  There were about 50 people inside, including the 25 election volunteers and ‘officials.’  Our first election in Hawaii.  Of course, the weather was perfect, with the electorate in flip flops and casual cottons.  We parked right out front, and there was no line.  Easy peasy.

Then, towards the end of the day, they ran out of paper ballots.  How can a state run out of paper ballots?  Wouldn’t it seem prudent to err on the side of ordering more than the numbers you might estimate?  That’s just me, though.  They allowed voters to use the only ballots they had left...ones in a FOREIGN LANGUAGE!  Now that I think about it, Barack Obama and Mitt Romney are probably written the same in any language...but still.

And, what in the hell is wrong with Florida?  I think they screw up on purpose, just to get the attention of the nation...remember the hanging chads?  I believe that as of today, Florida has yet to certify their ballots.  Really?  If Hawaii can use foreign-language ballots and get their results in on time, why does Florida get to wait?  Archaic systems would be the description of our state-by-state voting regulations...a cluster fuck, to be sure.

After we voted, we went to lunch, where Sally ordered the Lame Duck.  I had Pork-Belly stew to start, then enjoyed some Corruption Mousse for dessert.  Sal ordered the Humble Pie, and as we left, the lobby was filled with...you guessed it...lobbyists!

Now, we’re just hoping we won’t have to rent a hang glider for the fiscal cliff.  That’s why we joined No Labels... http://NoLabels.org to stem the tide of bipartisanship and bring civility and progress back to the workings of Congress!  Take a look at them, join up...and we’ll be able to pull the ‘grass roots’ up from underneath our representatives and congresspeople!

Posted by The Midlife Gals at 5:40 PM No comments: