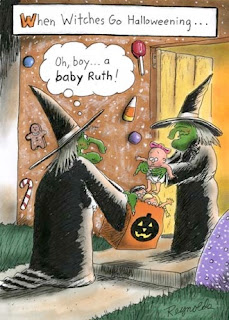 Oh goodie! A full day dedicated to scaring small children! Sal and I don’t usually wait until Halloween to scare the wee ones. And, we’re immune to guilt, accusation or shame, because we’re childless by choice.

We know it’s not right to scare children, especially the very small, defenseless, trusting ones. If we were mentally stable, we would be remorseful the next day, but that hasn’t happened yet. Unfortunately, now-a-days, the parents feel compelled to accompany their children while trick or treating. That’s just wrong. Our parents were out at Halloween parties in fully frightful yet stylish costumes, drinking and smoking, with nary a moment given wondering what horrors their children were being exposed to. That was the fifties. Nobody cared. They assumed that the world (or west Texas in our case) was not a dangerous place. They were right. We were out being scared shitless by the whack-a-doos (much like SalGal and I), who lived for this date, who worked on their costumes, dry-ice smoke wafting across the porch, zombies creeping up on them before they could even get to the door, etc. It’s a sad commentary, isn’t it, when you can’t let your children out for a night of life-altering fear? It shapes a person.

I love Halloween, the little, baby bumblebees, the neighborhood witches, the local zombies. And then there are the kids in their costumes. Good times. I have gone to the grocery store and stocked up on orange Reese’s Peanut Butter cups and eyeball jawbreakers. Later tomorrow I will get the candy for the kids. Oh, and the vodka. It’s just more fun with a martini next to the giant Jack-O-Lantern I got for the front window. And, I figure I can put a red light in it and white beard and Santa hat and use it again for Christmas.

It’s all about ‘gaudy’ as far as holiday decorations are concerned, and I am not one to be left out of the artistic displays of lit-up tackiness. The neighbors down the street have a huge, blow-up decoration in their front yard. It’s a big, Casper the ghost with a gigantic pumpkin. This is good because, but for these audacious balloon monstrosities, the teenagers would have no fun at all on Halloween night. I wish I could go with them when they sneak out of their windows in the dead of night to prowl around the hood, puncturing all of the blow-up decorations and toilet-papering the cheerleaders’ houses.

Oh, yeah, we know who all the cheerleaders in the neighborhood are because their houses look like ghosts got shredded in the trees and their Jack-O-Lanterns have penises the next day. Come to think of it, screw the goblins and peacock toddlers, Halloween is really for teens….and women with martinis.

SalGal
Posted by The Midlife Gals at 8:52 PM No comments: